The Administration Building of the original Abashiri Prison 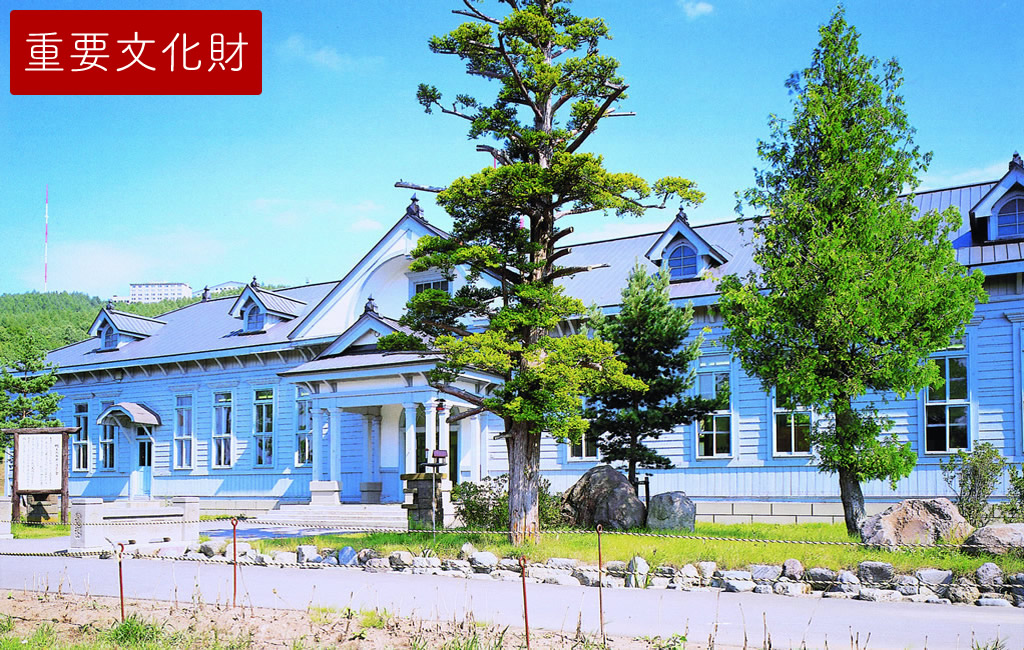 The Administration Building was the center for management of the prison. In addition to the warden’s office, there was a meeting room and offices of the General Affairs Division, the Detention Division, the Supplies Division, the Education Division, and the Prison Labor Division.
This wooden one-story building has a hipped, tiled dormer roof. There are six semi-arched dormer windows.
The wings at the right and left ends of the building extend backward. A semi-arched dormer window at the center is under the gabled roof. A finial-like ridge-end tile is placed on the gabled roof, under which a semi-arched gable board is fixed. Beneath the Western-style window under the gabled roof, there is a gambrel roof with a ridge-end tile that is the same as the other one in design. The space under the gambrel roof is a carriage porch.
King post trusses are used for the roof framework. The roof framework is built with pyramidal timber roof trusses.
The gambrel roof, under which the front door is located, is supported by square columns with capital ornaments. A Rising Sun flag is on the gable wall.
After clapboard and wainscoting were installed, the external walls were painted and double-hung windows were built.
The interior walls are finished with a plaster-like white material. At each chimney outlet, a megane-ishi (a decorated tuff plate with a hole for the stovepipe) is placed to protect the wall from heat. Round ornaments are placed in the center of the ceiling made of a plaster-like white material.
The architectural style of this building is that of a typical government building from the Meiji era (1868-1912). It features beautiful details.
When lights were on in the building, which was painted light blue and gray, the building stood out against the dark sky. At the Administration Building, night was as bright as day. People in Abashiri described it as “a sleepless place in the farthest land”. 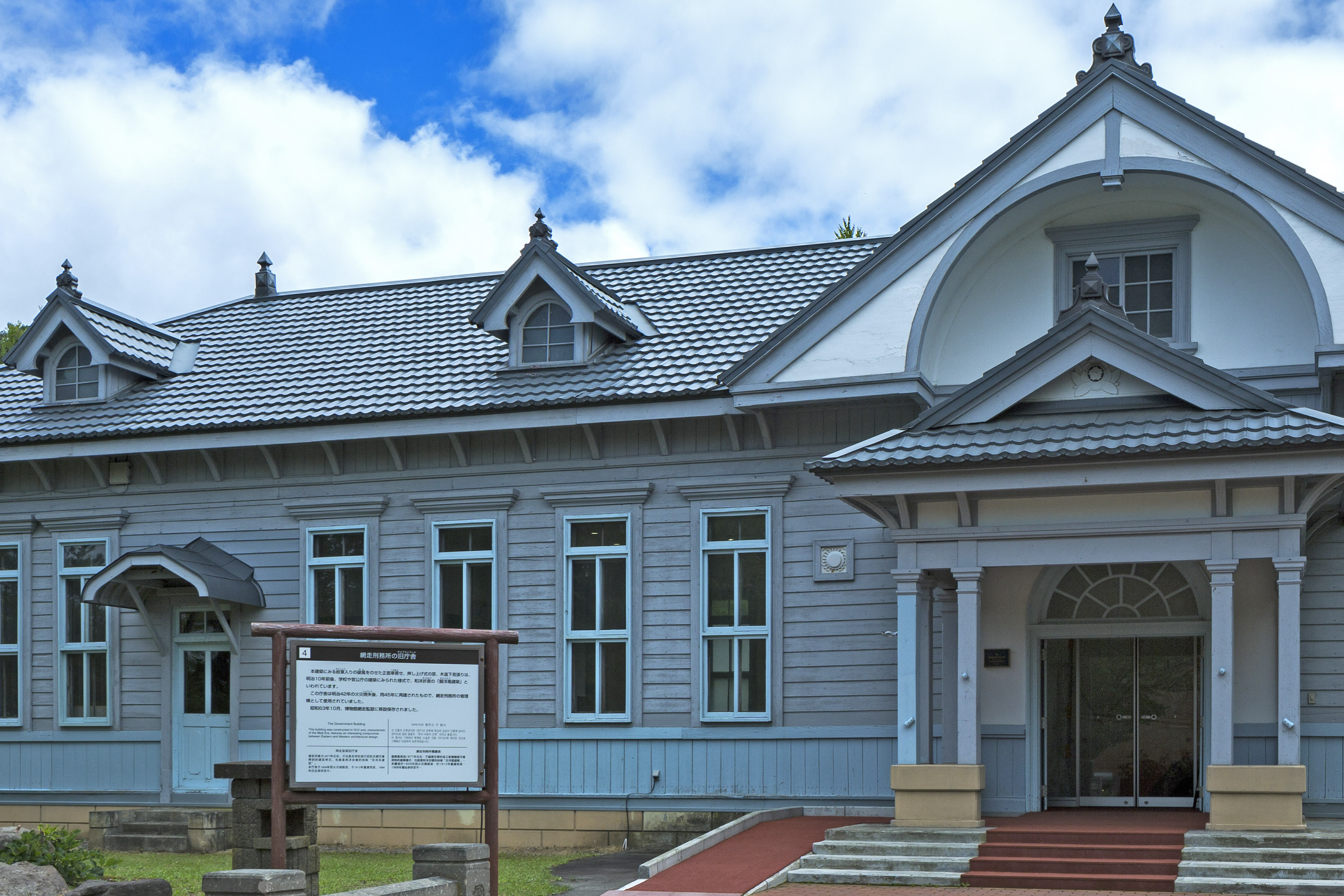 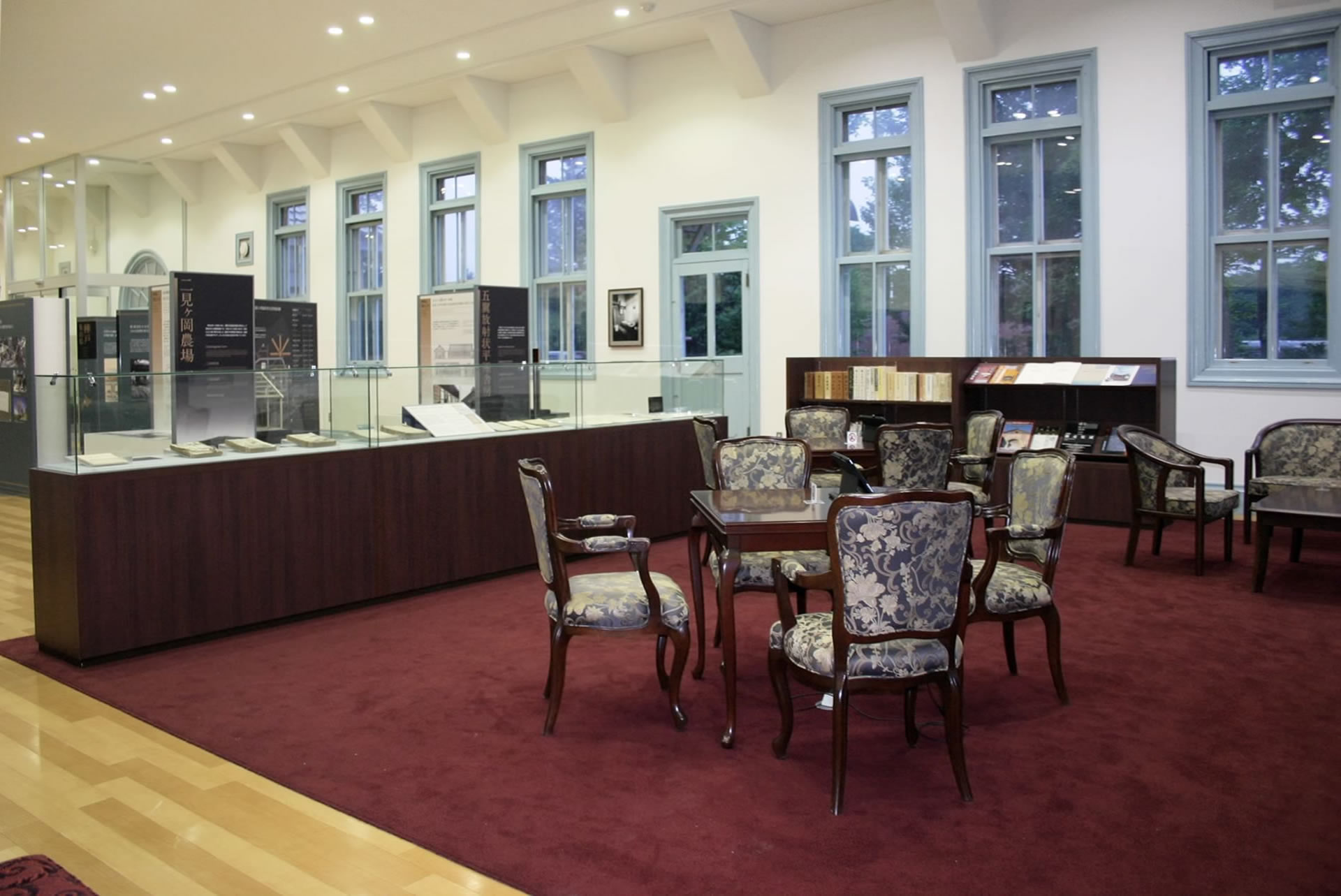 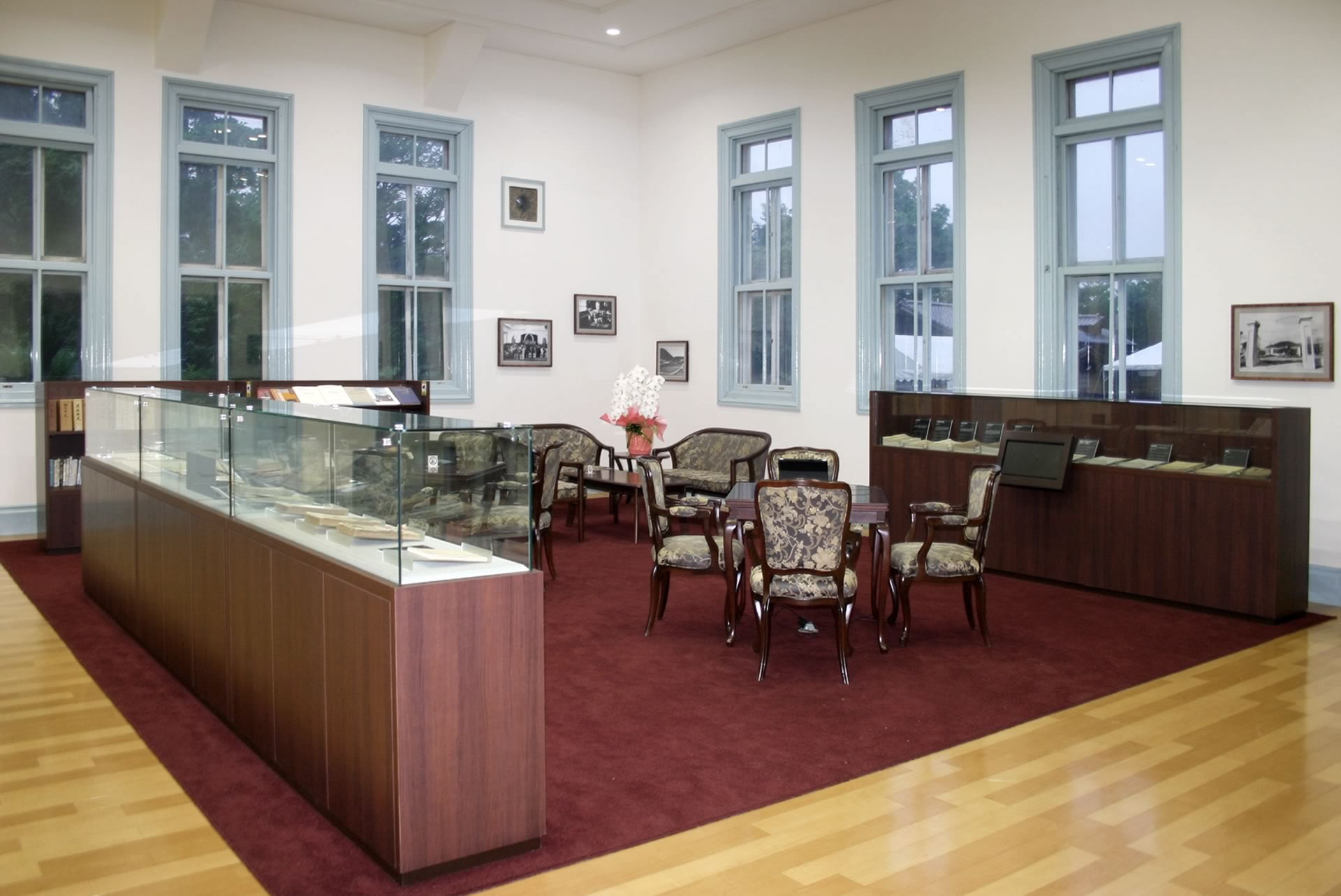 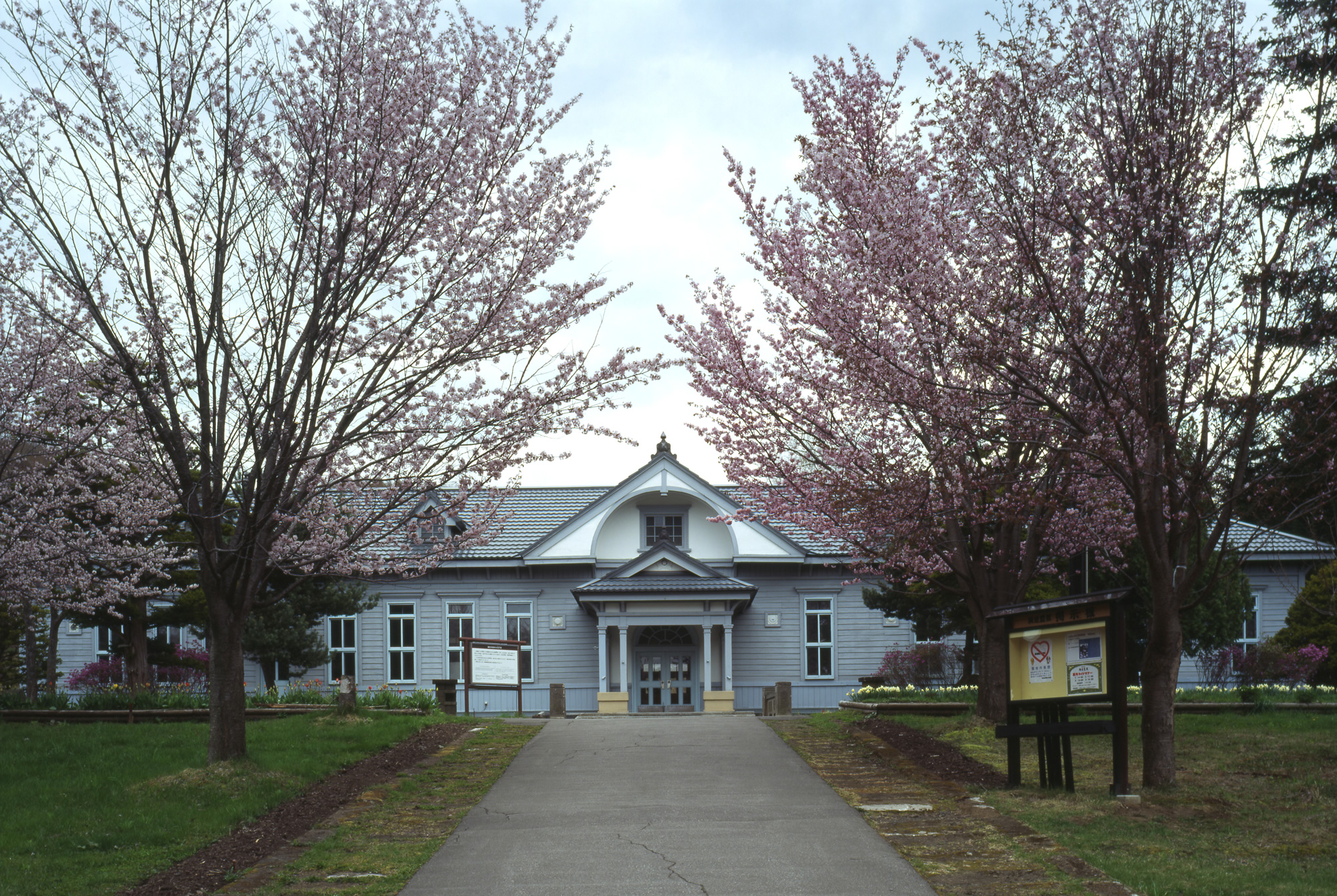 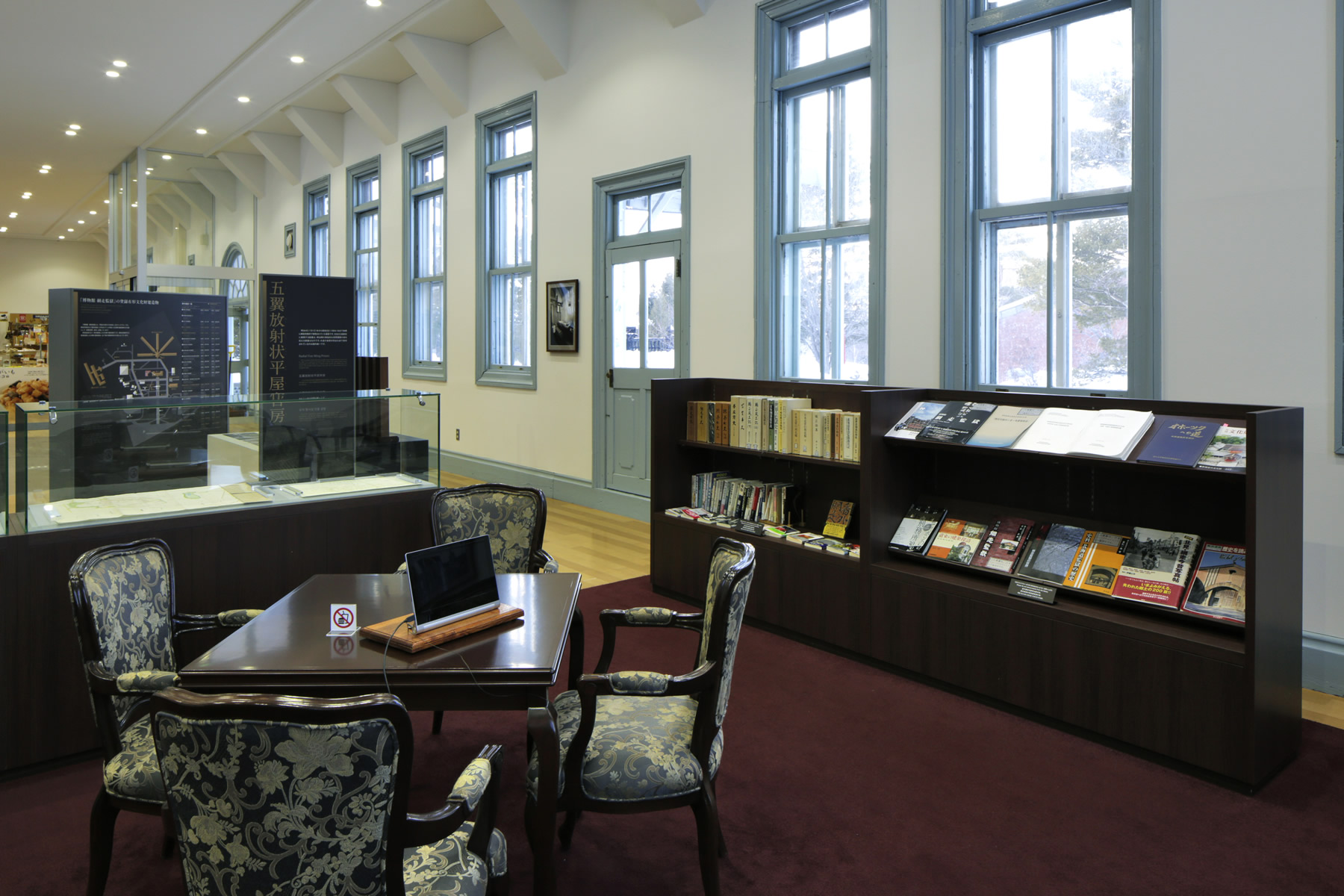