Buildings of the Futamigaoka Branch, the original Abashiri Prison 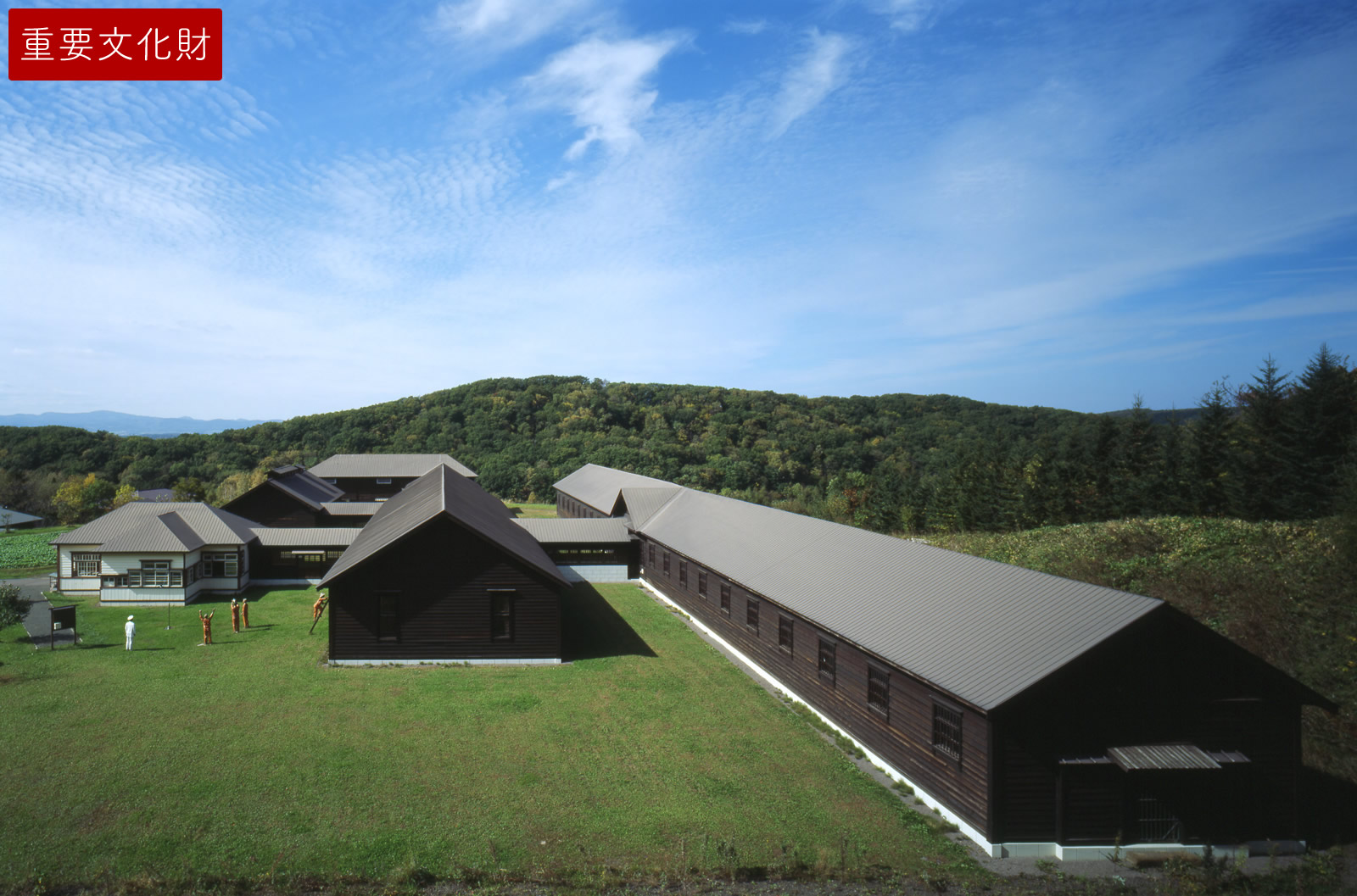 The Futamigaoka Branch was established on hilly land in western Abashiri as a pilot farm for the prison. It was first called the Kussharo Branch. The buildings of the branch were constructed on a hilly area that commands a view of Lake Abashiri and Lake Notoro. Later, the branch was renamed the Futamigaoka Branch. Used for over a century, this “open-prison” farm keeps producing food for inmates of Abashiri Prison, playing an important role as farming facilities where inmates working in the vast farms engage in the process of production, management and harvesting in an autonomous manner. The Futamigaoka Branch buildings are the oldest wooden prison buildings in Japan, and these were moved to their current location in 1999.
The Administration Building, the prison houses and the kitchen were built in 1896 when the Futamigaoka Branch was established. The Lecture Hall and the Cafeteria were built in 1926, and the building for chaining and unchaining was built in 1930. When the Futamigaoka Branch was founded in 1896, each building was independently managed. As the farming facilities became increasingly important in the Taisho era (1912-1926), necessary buildings were added or improved and were connected by corridors, and the Administration Building was renovated. Currently, the floor area of the farming facilities totals 1,937m2. 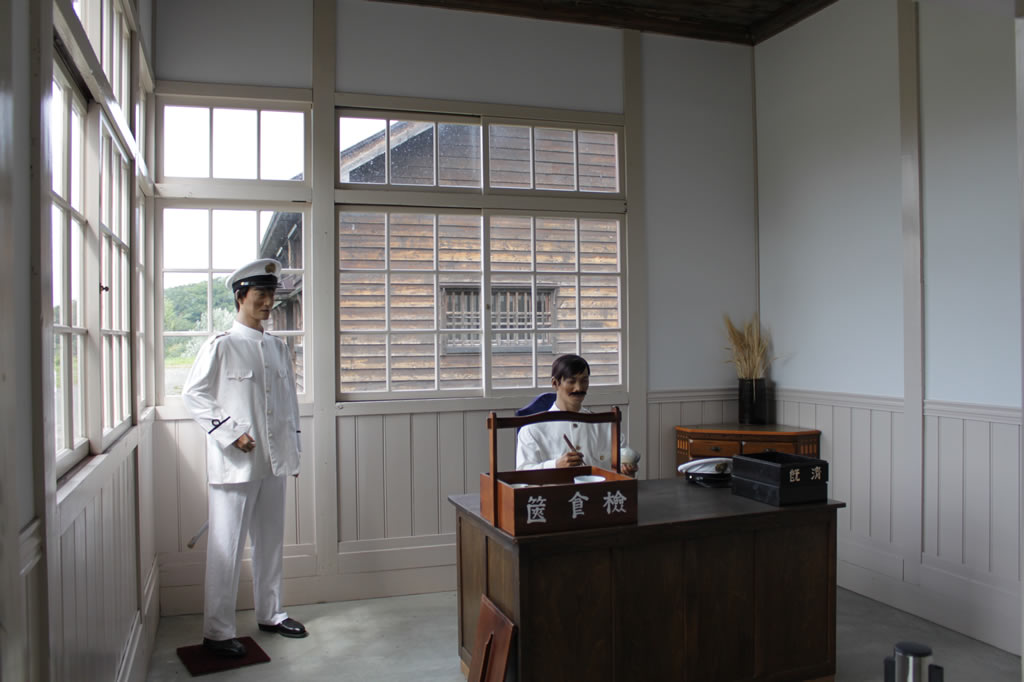 The Administration Building is a small, Western-style building with a hipped roof made of iron sheets. Clapboards are installed on the exterior walls. The roof framework was built by using king post trusses, and the portion sticking out from the main walls of the building has a roof structure in a Japanese traditional style called wagoya. The front door is at the center of the building's southern side. A corridor leads to the building's northern side. An office room is on the eastern side, and a night-duty room and a resting room are on the western side. The floor is made of brick or concrete. The ceiling is flat, made of smoothly planed boards, and molding is applied where the walls meet the ceiling.
The building is simple in general, but the window cornices, gable ornaments, and door frames have decorations.

Clapboarding is applied to the exterior walls of the prison houses. The roofs are gabled and made of iron sheets. The Central Guard House is at the center of the premises. Two prison houses are situated in tandem. The one on the eastern side is called Prison House No.1, and the one on the western side is called Prison House No. 2. When the Futamigaoka Branch was established, there was one more prison house, on the northern side, and the three prison houses formed a "T".
The Central Guard House has a wooden floor. The flat ceiling is double-corniced. The walls are finished with plaster, and wainscoting is applied to them. In each prison house, the cells are positioned on both sides a central corridor. Each prison house has 20 shared cells, and each cell has a floor space of six tatami mats. The wall between the corridor and each cell has a wooden door in the center, a vertical lattice panels on both sides of the door and a window with wooden bars above the door. The cross section of the vertical lattice is a parallelogram in shape. In the Central Guard House, the roof framework was built by using king post roof trusses. Trusses and a roof structure in a Japanese traditional style called wagoya are used for Prison House No. 1. The roof framework of Prison House No. 2 is similar to queen post trusses, in which the bottom chords are not connected to each other. 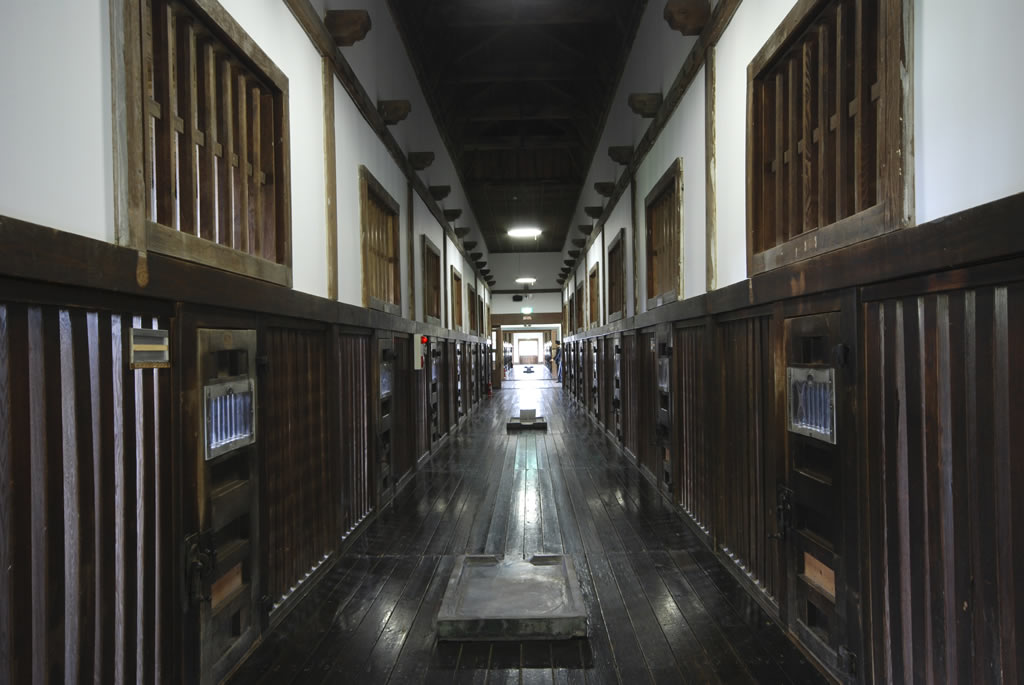 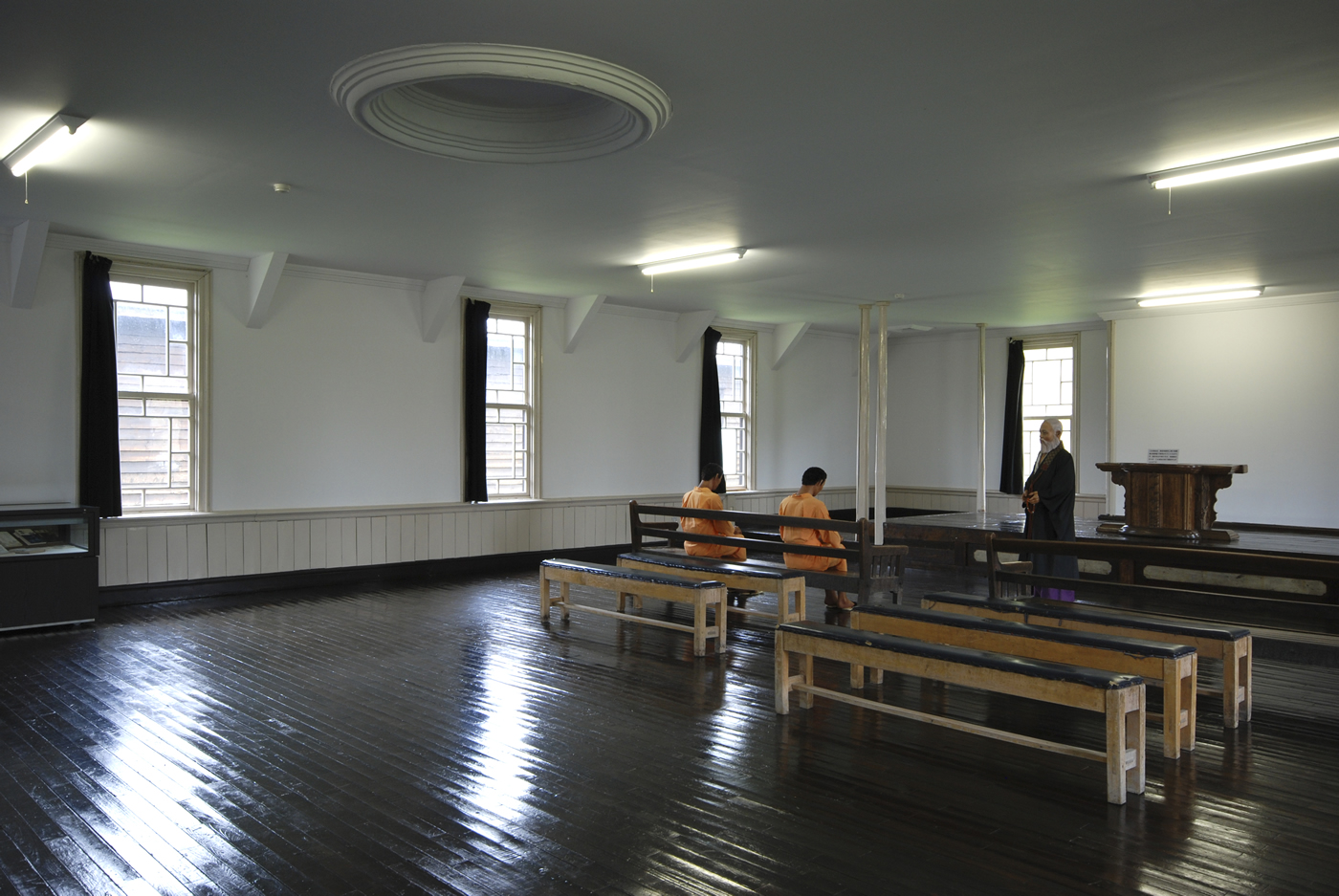 The Lecture Hall is a room with a wooden floor. A portion of the floor is raised to create a stage. The interior walls are finished with a plaster-like white material and wainscoting is applied to them. There are double-hung windows in the room. Round ornaments are placed at the center of the ceiling. The vents on the ceiling are square. The roof framework was built by using queen post roof trusses.
The cafeteria has an earthen floor and a board and batten ceiling. There are large diamond-shaped vent lattice windows at two places. Double sliding glass windows with a transom are fitted with wooden bars on the outside.

Building for chaining and unchaining

In this building, inmates attached and removed chains or restraints before and after farm work. The two-story building has a hipped roof made of iron sheets. A work area is in a one-story building with a gabled roof made of iron sheets.
Clapboarding is applied to the exterior walls. In the building for chaining and unchaining, long tubs are placed on the northern side for inmates to wash their feet, and a laundry is on the southern side. On the second floor, there are rooms for storing miscellaneous articles, clothes and books. The floor is boarded up, and skylights are placed at the upper part of the walls. King post trusses are exposed at a portion of the roof without the board and batten ceiling. 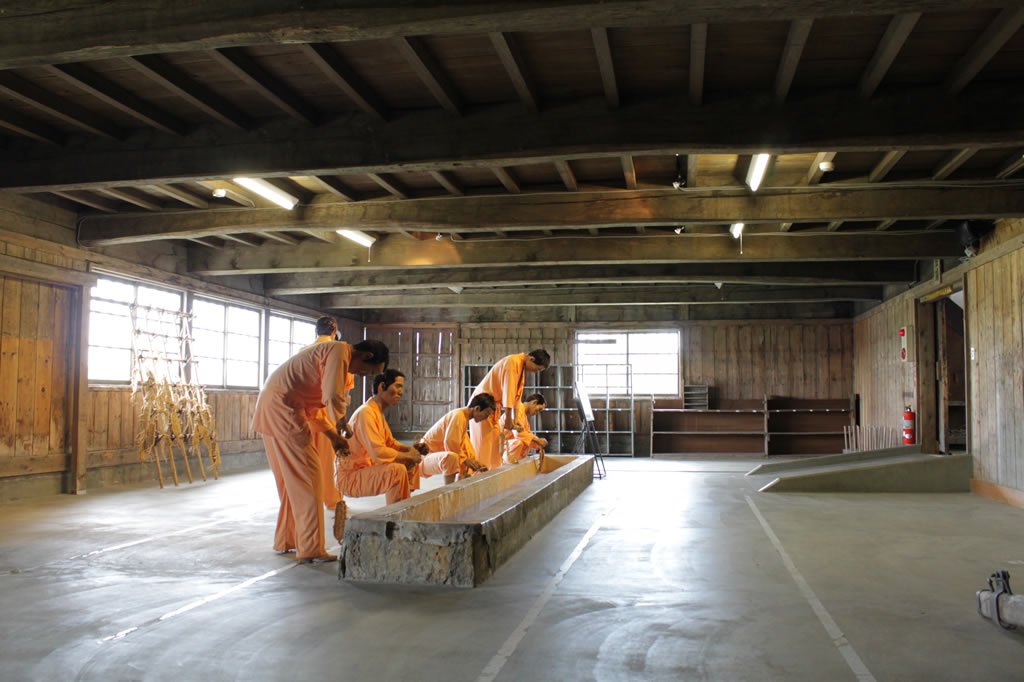 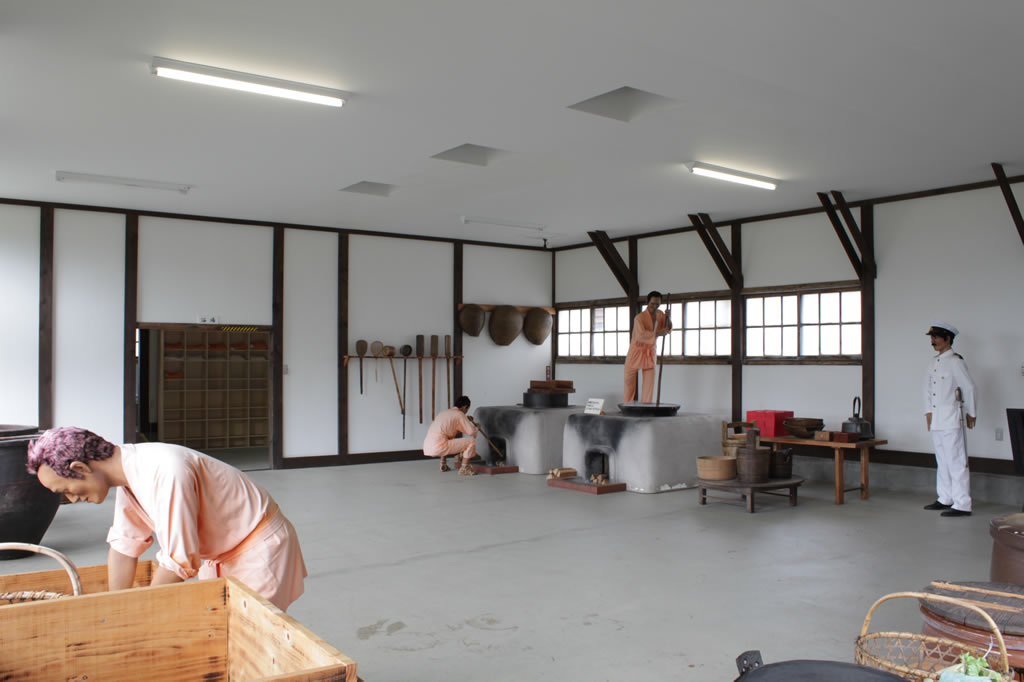 The kitchen is in a building with a gabled roof made of iron sheets. Clapboards are installed on the exterior walls, and king post trusses make up the roof framework.
There are two vents of different sizes for removing smoke. A bathhouse is next to the boiler chamber adjacent to the kitchen. The bathhouse has two tubs. The Futamigaoka Branch, which consists of prison buildings and farms, is unique among prison facilities in Japan. Major buildings that were constructed in 1896, when the Futamigaoka Branch was established, still exist. These buildings have been designated, as a unit, as a "nationally important cultural property", because their historical and academic value is recognized. These buildings are recognized as architectural remains that show a process of development in the administration of punishment. At Abashiri Prison, punishment was first administered by means of physical labor at places distant from the prison, and then step-by-step administration of punishment was developed by utilizing pilot farming facilities. 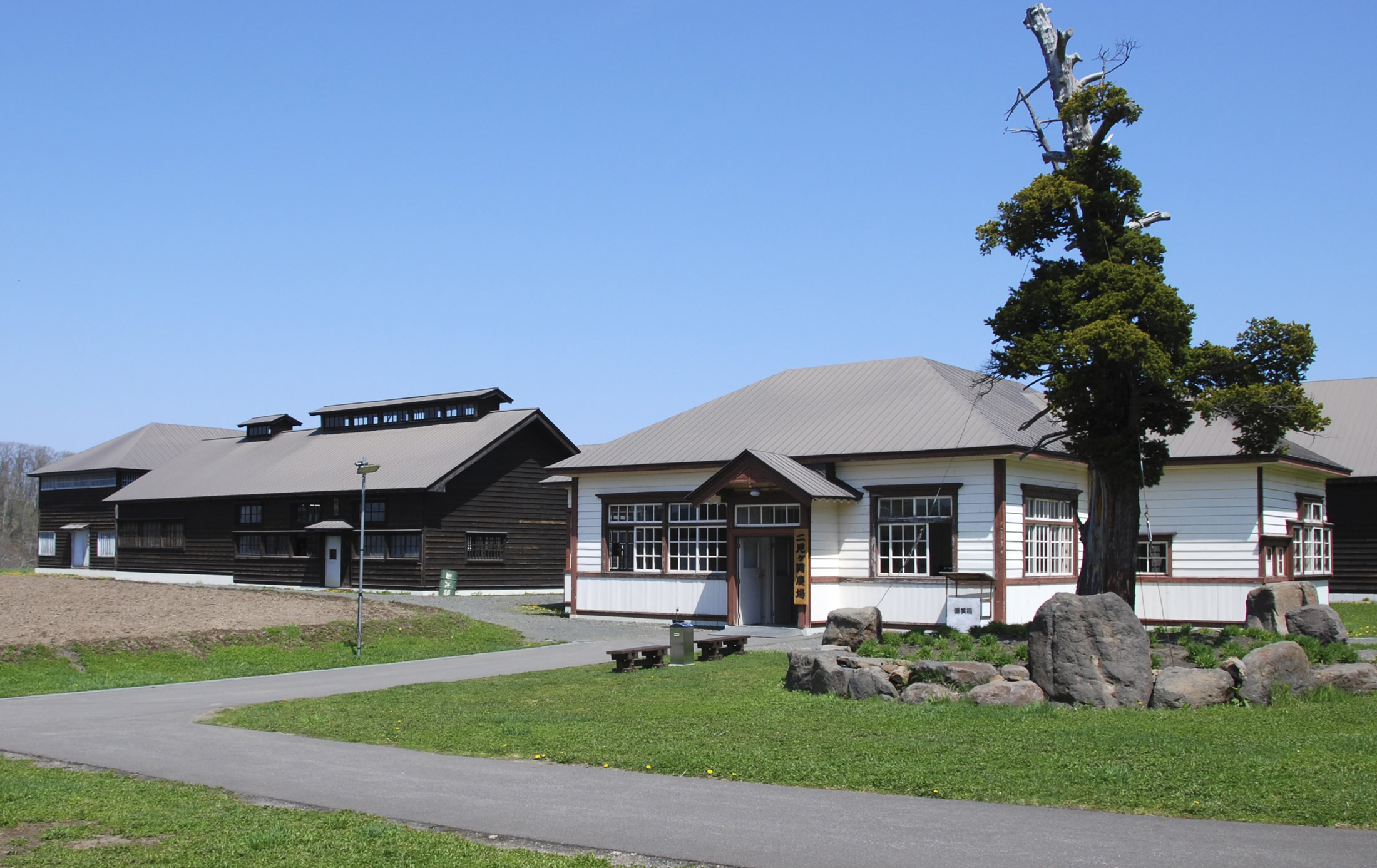 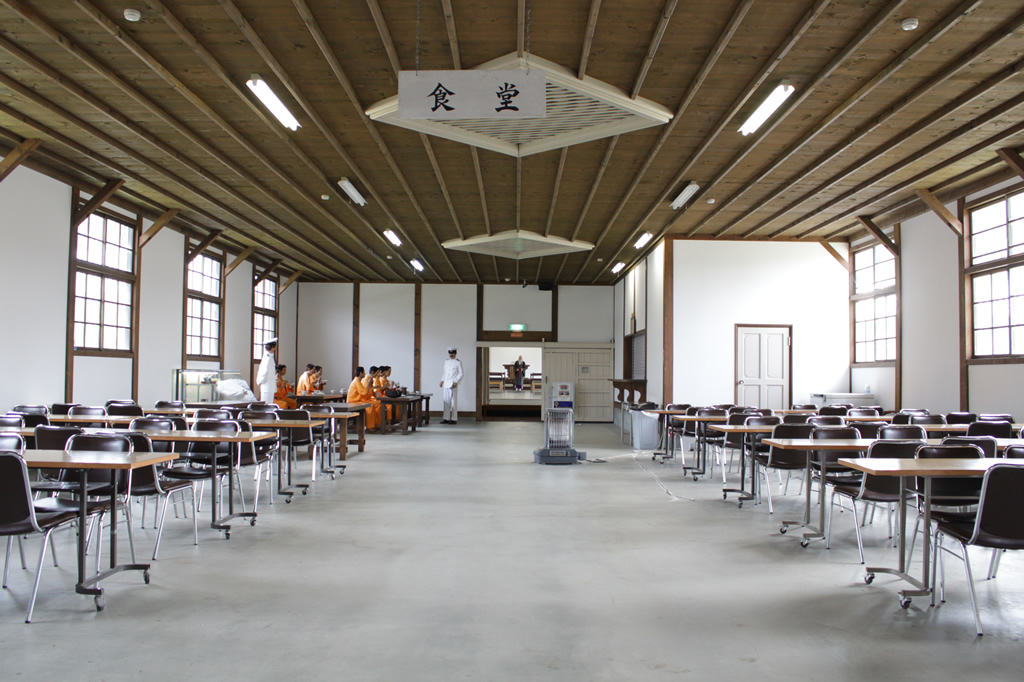 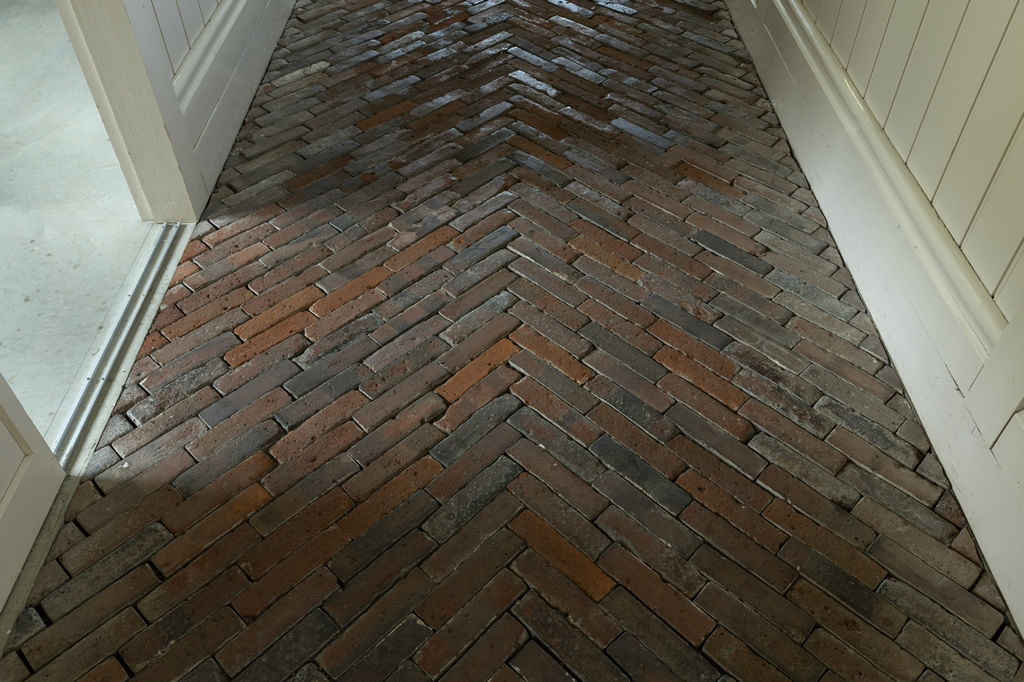